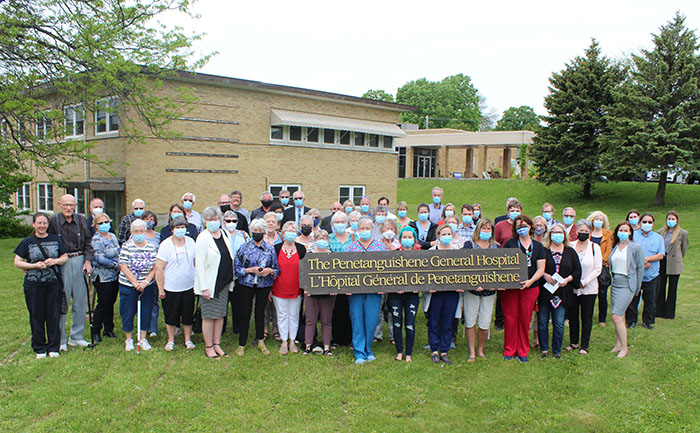 May 26, 2022 – Members of the community and representatives of Georgian Bay General Hospital gathered today to remember and celebrate the legacy of the Penetanguishene General Hospital (PGH). The event, held at the PGH site, included a smudging ceremony, prayer to pay homage to the hospital’s Catholic history, a historical summary, remarks from Penetanguishene Mayor Doug Leroux and stories from retired staff about what it was like to work at PGH.

PGH has held a special place within the Penetanguishene community for more than 110 years (see historical timeline below). Beginning in a small home in 1911, the hospital has changed and grown over time to meet the needs of those it served. This growth and change would not have been possible without the exceptional support of the community, including the hospital’s Auxiliary, which dates back to 1920.

“I am so thankful to have been a part of PGH, which whole-heartedly embodied its motto of To Serve, To Love, and honoured to have played a role in caring for this community,” says Doris Shirriff, former CEO of PGH. “Change is constant and inevitable, but I can tell you that at any point during its long history, working at PGH was a special experience. It was like a family and it always will be, no matter what the future holds for this site. Everything that PGH was is still in the hearts, minds and hands of the people who worked here, not in the bricks and mortar. The spirit of PGH will continue to live on within this community.”

As PGH and Huronia District Hospital in Midland eventually entered a formal partnership to become the North Simcoe Hospital Alliance in the 1990s, planning occurred to divide some services between the two sites due to their close proximity. Within that same decade, the focus of PGH became on complex continuing care and rehabilitation while acute services were concentrated in Midland.

“Recognizing the close proximity of the two hospitals, the decision was made to concentrate specific programs between the two sites, ensuring similar care was not being duplicated just a few kilometres away,” says Gail Hunt, president and CEO, GBGH. “As a hospital administrator though you can appreciate that it’s about more than just numbers. You can never discount the feelings a community has toward foundational institutions like its hometown hospital. Residents of Penetanguishene embraced PGH and steadfastly supported it in every aspect. As we’ve noted in reviewing and preparing for this legacy event, there is a rich and fascinating history to this hospital which has been evident since I first arrived in this community.”

Six years after formally amalgamating HDH and PGH (2008) into what is now GBGH, the Board of Directors made the decision to move complex continuing care and rehabilitation services to the Midland site. Since that relocation in 2014, Dialysis services and the hospital’s Finance department remained in the Penetanguishene site. The building was also been home to tenants including the Georgian Bay Cancer Support Centre and Hospice Huronia, prior to both organizations relocating. Finance and Dialysis moved out of the building in 2021 and 2022, respectively.

The hospital anticipates the building will be on the real estate market this summer.

To view a slideshow video recapping some moments in PGH history, please visit: