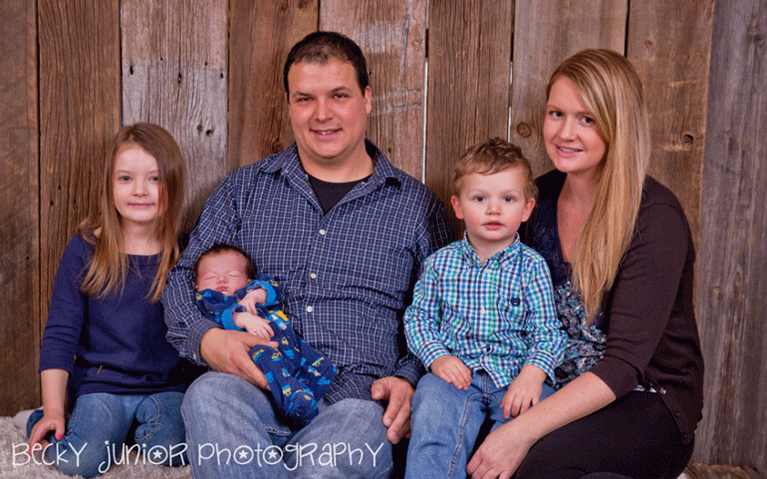 A Victoria Harbour family has been celebrating the new year in the best way possible – with the addition of a new little boy.
Just after 2 a.m. on January 4, Kristie Goldsmith, 33 and Jeff Dumont, 33, welcomed Cole Jeffrey John Dumont to the world – making him the first baby born at Georgian Bay General Hospital in 2017.

Weighing in at 8 pounds and two ounces, and measuring 21 inches long, Cole was just over a week late, noted mom, so she was quite surprised to when hospital staff – including on duty Labour and Delivery nurses Kim Eichenblat and Jessica Williams – informed her that they had the unique distinction of having the “New Year’s Baby”.

Kristie arrived at Georgian Bay General Hospital shortly after midnight, and the delivery went quickly and smoothly, she said, with Cole arriving at 2:03 a.m.

“I wanted to deliver in Midland. Dr. Helt is our family doctor and he delivered the baby as well,” she said. “The nurses were great and really helpful. I had a good experience there last time so I had no reason not to go back. Everyone is really nice and friendly and they really took care of me and Cole. I am very glad it it’s still open and that I had the chance to go there.” This is mom’s second child, and dad’s third, and both are adjusting extremely well to their new sibling.

“They’re very helpful and they love him – it’s been really good,” she said, adding life with a newborn has been going as smoothly as can be expected – although it will take some time to adjust to the middle of the night feeds again. “He’s doing really well. He sleeps well and eats well (and) he’s very content. He fits well in to our family, which has been nice since we’re already so busy with two other kids. (He) will be our last baby so we’re taking advantage of cuddling him and loving him as much as possible.”